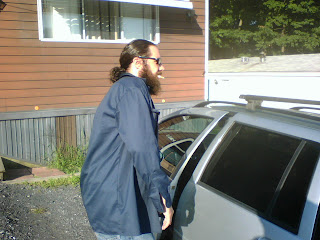 This is Eric getting into his car. I met Eric at a gas station shortly after entering State College Saturday. Thinking I might shoot for 35 miles that day, I chose instead to accept Eric's invitation to crash at his place. That worked out well because with my insane mileage early that day, I still did 25 miles by about 7:00, then had plenty of time to relax. --> Figuring I'd start moving no later than 3:00 Sunday afternoon, I ended up sticking around and staying at Eric's place again that night. That also worked out well because I was about 30 miles ahead of where I'd planned to be by then. --> It was cool hanging with Eric because he felt like a friend right from the start. It's nice to get a break, some comfort, and some companionship once in a while, and this was a rare instance in which I was able to receive those things. Thanks for everything, Eric. I had a great time hanging with
ya.
Posted by Ryan M. Powell at 8/30/2010 10:15:00 PM 4 comments: Links to this post