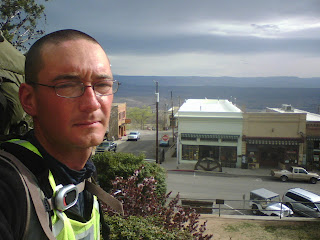 I suspect Jerome is heaven. It's such an amazing place, even when you're there and gone in the blink of an eye. No picture can do it justice, either. --> This morning, as I made my way out of Jerome, an old lady said something to me from across the street. Walking over to her yard to respond, we ended up talking for maybe 15 minutes. She was so cool, with a cynically filthy mouth not unlike my own. The language seemed so out of place for a woman of her age; it was great. Figuring she was about 70, I was shocked when she told me she's 90. I never did get her name, but she said she used to be an actress; apparently a pretty well-known (or famous?) actress. Man, I need to remember to take pics of people like her. --> Half an hour later, I encountered a cyclist/traveler on his way up into town. His name is James Johnson and he is riding from Chicago to San Diego to Portland and then back to
Chicago. We talked for about an hour. http://crazyguyonabike.com/doc/turtleadventure2010.
Posted by Ryan M. Powell at 4/01/2010 12:38:00 AM No comments: Links to this post