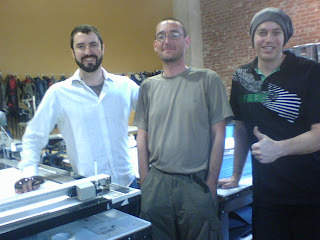 I hate posing for pictures. I always end up looking like a total dillhole. (The flab will be gone soon, but I should probably make an effort to start doing push-ups on a regular basis.) On the left is John Sears, Director of R&D for Gregory Mountain Products. On the right is Nick Kelso, Sample Maker, who performed some very important repairs on my pack today at Gregory's headquarters in Sacramento. The people at Gregory are awesome. I was there for five hours, talking pretty extensively to almost everyone in the building. Nick nearly re-engineered my pack, replacing several key parts that were worn out, broken, or dirty. They also fed me, an act that always wins major points with me. But mostly it was just cool meeting them and seeing a little bit of their operation. It's clear that they spend a lot of time working to make their products the best they can be, largely by listening to
feedback from people like me. Most American companies could learn something from the folks at Gregory.
Posted by Ryan M. Powell at 1/14/2010 09:37:00 PM 3 comments: Links to this post