I just bought 'Into the 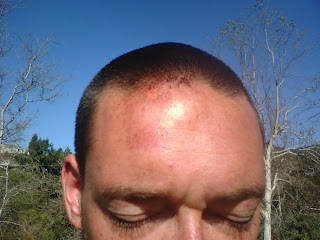 Here's a pic I took of my head Monday morning, about 16 hours after I slammed it on a tree root. As I hit the ground, I thought something to the effect of "Oh fuck! I might die now." No bullshit. Fortunately it ended up much less serious than death. Regardless, it was a very scary moment. --> I crossed paths with George Throop a few hours after my spill Sunday. Lots to say about him, but it's gonna have to wait until I make it to a computer. --> Monday night, as I ordered my usual at In-N-Out Burger in Hollywood, I received a call from an unfamiliar number. It was Jim, the guy I hung out with in early January! We met up last night, and he's gonna pop up again here and there. --> This morning I woke up at the intersection where the Rose Parade turns (Orange Grove & Colorado). The manager at Ralph's on Colorado in Pasadena is the biggest cockwad on the planet. I masterfully boosted his
blood pressure today; no regrets. Tonight I'm in Glendora. My head seems to have felt better today.
Posted by Ryan M. Powell at 2/18/2010 03:19:00 AM No comments: Links to this post