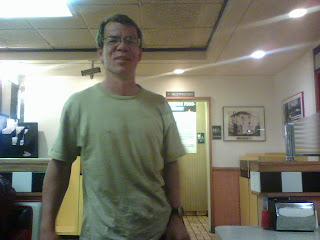 OK, here's Jim at Carl's Jr. So much to say about my adventures with Jim, but no time to say it. --> I read in the LA Times this morning that it's now pretty clear that NBC fucked up big-time when they axed Leno from the Tonight Show and rearranged the late night lineup. Duh! Who couldn't have seen that coming? It kinda makes ya wonder what kind of idiots are running the show over there, doesn't it? Yeah, well I guess it also helps explain why I haven't heard from NBC, months after they contacted me, having seen at least one of my videos on YouTube. And I'll tell you what: The videos and stories I've been able to share with you are a mere fraction of the great stories I've lived and the compelling characters I've met. This stuff needs to be seen by the American people. My Aimless adventure needs to be a TV show. It's the best show there's ever been, but you're all missing it. So I'm
asking you to write to the networks and even MTV. Tell them why they should get behind Aimless...

This message has been sent using the picture and Video service from Verizon Wireless!

To learn how you can snap pictures and capture videos with your wireless phone visit www.verizonwireless.com/picture.

Note: To play video messages sent to email, Quicktime@ 6.5 or higher is required.