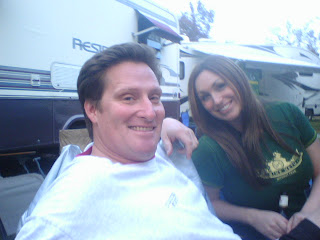 This is Kurt and some girl whose name I don't think I ever knew. I watched most of the Rose Bowl with them beside an RV outside the stadium. Good game. The RV belonged to a guy named Chris, who played center for Oregon in the mid 80s. I also met some local people earlier in the day who were cool as hell. They go to the Rose Bowl every year. From what I've heard, my interview on channel 6 was really cool. Hope you saw it. --> I stuck around Pasadena for the championship game. By game day I'd been hanging for several days with another tramp (from Cleveland) named Jim. Very cool guy. Almost all the people who talked to us, as we wandered the stadium parking lots, were USC fans (not Texas or Bama fans). --> The other day, as I watched Jim fly a sign ("Tough Times") at an off-ramp, an old man driving on the opposite side of the ramp honked a few times to get Jim's attention. When Jim turned
to look, the old man flipped him the bird. It was so funny. I'll put a pic of Jim in the next post.
Posted by Ryan M. Powell at 1/10/2010 06:30:00 PM No comments: Links to this post