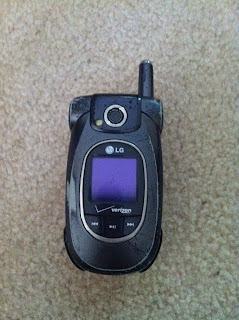 I've had the same phone for like four and a half years (pictured). Even though it is ancient and useless for most people, I like it pretty well. I especially like it when I'm on the road, precisely because I CAN'T use it to get to Facebook or any other brain-wasting web sites (which is almost all of them nowadays). It's nice to get away from the internet, sometimes for months at a time.

However, as I learned in Pennsyvania last year, sometimes you absolutely need internet access because sometimes you can't get a state map until way after you need one, and sometimes a good state map isn't good enough to help you figure out what you need to figure out. Sometimes interactive maps are the only feasible way to plan a route. If you want to better understand what I'm saying here, take a look at a Pennsylvania state map and try to figure out how you intend to walk across it, entering the state on US 40 at the West Virginia state line, with the intention of walking to NYC.

Seriously, give it a try. But before you plan your route, be sure to keep these things in mind: 1) After having already walked 3,000 miles, you want to find the shortest possible route across PA; and 2) You want to choose a route that'll put you in a town at least every 10 miles or so, which may require using a route that's not the shortest. Now look at your Pennsylvania state map again and tell me your route. See my point?

Last Monday I went with my mom to the phone store, hoping she'd be willing to help me get a phone that was at least equipped to handle the internet. When we got there, she went straight to the iPhone display. Long story short... I have an iPhone now.

I'm not saying I will use all this stuff on a daily basis now just because I can. But I'm not saying I won't, either. I'm just letting you know I now have the tools to more easily share my upcoming journey. I want to share this journey as much as possible (without turning into an attention whore), but I already know I'm gonna need a lot of Ryan-time, and Ryan-time comes first. Also, I already know the iPhone battery drains pretty quickly if you spend much time messing with it, so I'm gonna have to limit my usage most of the time to keep from killing the battery.

So far I do not find the qwerty keypad any more useful than number keypads because 1) It's nothing like typing; and 2) I'm always hitting the wrong letters anyway because the "keys" are so small, which constantly makes me have to delete and re-type. I'm sure I'll get better at it in time, but I'm still hoping I can find and obtain a good lightweight, roll-up keyboard to use with the iPhone. I'd say I can type ten times faster on a keyboard than I can on any kind of keypad. That means a blog post that takes five minutes to compose on a real keyboard might take around 50 minutes on the iPhone. That's 45 minutes I could be resting instead of typing. Hopefully I can get something worked out.

Here's one of the major benefits of having an iPhone: With the iPhone, I will almost certainly end up with some very compelling video of cops committing crimes against me. Y'see, when I walk, I always pay attention to what's going on around me. (If I didn't, I would have been dead at least a year ago.) So whenever I see a cop pass me, then slow down to turn around, I'll have more than enough time to turn on the phone, clip the phone to my sternum strap, and capture video of almost everything from a first-person perspective. The cops will never even know it's on because the display will be against my chest (in the case).

Better yet, I will be able to upload videos to YouTube from the phone. And if I manage to push all the buttons right whenever I see it coming, this shit will blow your mind.

However, I don't think I'll get any good asshole-cop videos for a while because the east coast is mostly urban. City cops rarely go out of their way to start shit with people like me. But I don't know what to expect when I get to Georgia, Alabama, and all the other southern states. Regardless, I know my rights. I cooperate with cops until they start treating me like a criminal. But once they start treating me like a criminal, without any justification or any reason, I respond like someone who knows and values his rights and the limitations of law enforcement officers.

In case you're not aware of my rights or the limitations of law enforcement officers, here's a beginner's course: The Fourth Amendment of the United States Constitution says cops cannot force me to identify myself to them, nor can they search me for ID (or anything else) unless they have a court order or damn good evidence that I've committed a specific violation of the law. The Fifth Amendment says I don't have to say a word to them if I don't want to. (This is true even before they tell me I have the right to remain silent.) On the other end of the spectrum, the First Amendment says I have every right to tell them to go fuck themselves, which I have done more than a couple times.

I took this picture with the iPhone.