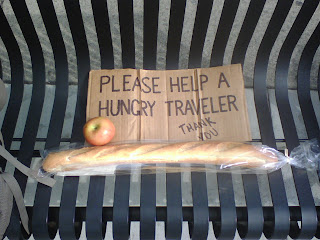 This is probably the most interesting donation I've ever received while flying a sign. (The 18" baguette, not the apple.) Standing on a concrete median beside the left-turn lane at an intersection (rather than an off-ramp, because some loser asshole bum was "working" the ramp), I received the baguette from someone driving the same direction I was facing, which is unusual. I'm guessing the donor must have already passed me from the other direction. Supposing he did, it means he probably put a good bit of thought into his gift idea. Hmmm... Hey, I'm not bitching; I'll eat the baguette, and I sincerely appreciate even the tiniest donations because no one owes me jack. I'm just saying it was a strange gift. --> The Avatar sign I mentioned last night may have to wait a while because I haven't found any cardboard yet. (Cardboard is a very precious mineral here in southern California.) Having
devoted a little more thought since last night, I'm now leaning toward writing 'DYING TO SEE AVATAR.'
Posted by Ryan M. Powell at 2/11/2010 05:47:00 PM No comments: Links to this post