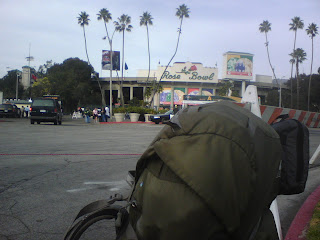 Yesterday was easy. I woke up and tore down, then found a spot beside the interstate by 9:00. By 9:30 I was riding in a big truck with a Canadian lady named Timi ("Timmy"). At 2:00 I was in Pasadena. Walking around Pasadena and the Rose Bowl, so far it seems as if we Buckeye fans are vastly outnumbered by Ducks fans. That's unusual; maybe the OSU fans are just somewhere else right now. --> I just did another interview with Clay Hall, right outside the stadium. I imagine it will probably make it to the air this time because, I mean, come on. So keep an eye on Channel 6's Rose Bowl coverage if you're in Columbus. GO BUCKS!
Posted by Ryan M. Powell at 12/31/2009 05:41:00 PM No comments:

Thanks, Luke, Brad and Stanish, for your text greetings. --> I've been out here in Primm, Nevada for a couple days now. Got a ride all the way from Las Cruces with a dude named Rodger on the 26th thru 28th. (He sleeps under his truck cap while traveling.) Although it made sense for me to get out in Quartzsite, I decided to extend the ride beyond Quartzsite, through places I've never been, then get a cheap room in Primm, where I'd probably end up blowing all my money on nickel keno. I almost did blow it all, but now I have more money than I did when I arrived, even after paying for a room and some food. Tonight I'm sleeping outside, though, across the state line, in California. Although it's cold out here, it's also cheaper and more comfortable than a room, and it'll motivate me to get up early and try to get a ride toward SoCal so I can make it to the Rose Bowl. Besides, I had a good
shower this morning, so that should keep me good for a couple weeks.
Posted by Ryan M. Powell at 12/30/2009 02:59:00 AM No comments:

This doesn't even begin to describe what I just went through

Sunday, instead of getting out in Monahans, I went on south with Gil to Ft. Stockton. Sometimes ya just do that because the hours fly by when someone cool picks you up. When I arrived late in the afternoon, Ft. Stockton seemed to have all the right characteristics for getting a quick, long ride: 1) It was easy for drivers to see me; 2) There was plenty of room to pull over at the on-ramps; 3) I was stuck in the middle of the desert. And so on. Yes, it can be good to be stuck in a shitty place when hitchhiking. When you're stuck in a small desert town as Christmas approaches, people more easily find the kindness centers within their hearts... Not in Texas they don't. --> I finally got out of town today, after a miserable wait in some nasty weather (with something sharp stuck in my foot). Thankfully, a father and daughter made room for me in their pickup by moving a bunch of their stuff
from the crew cab to the truck bed. They brought me to El Paso. I'm so glad to be out of Ft. Stockton.
Posted by Ryan M. Powell at 12/24/2009 10:51:00 PM No comments:

Heading west in a hurry

The movie they were filming in Shreveport will be called "Super." Shortly after I sent the previous post, I found out that "they" don't want people knowing Kevin Bacon is a cast member. Oops. --> I got a ride from Shreveport to Abilene Fri-Sat with an older guy named Marty. No luck getting out of Abilene yesterday, but it didn't take long today. Waiting by the on-ramp at about noon, a pickup truck stopped near me on the frontage road to offer a ride. As I prepared to load my pack into the back seat, a trucker pulled over behind the pickup. The Latino truck driver approached me to offer me a ride, figuring he might be able to take me farther than the pickup's driver could. But Gil (Guillermo), the pickup driver, was actually going farther than the trucker. So I stayed with Gil, who could take me to Monahans, TX. Down the road, as we passed the trucker, the truck pulled over again,
apparently to offer assistance to another driver (minivan) who seemed in need of help. What an awesome guy!
Posted by Ryan M. Powell at 12/20/2009 09:16:00 PM 2 comments:

After a slow start to this new journey, yesterday I got a ride with a guy named Todd, who was on his way home to Bossier City, Louisiana (from Pennsylvania). Todd picked me up at an on-ramp in northern Kentucky, just outside Cincinnati, and took me all the way to Bossier City, where he also set me up with a motel room for the night. I'm pretty sure this ride is by far the longest ride I've ever received from anyone not driving a big truck. --> On I-30, somewhere near Hope, Arkansas, the traffic in front of us suddenly swerved and parted, revealing a pair of headlights coming straight at us. With only a few seconds to react, Todd was able to slow down and avoid hitting the moron, who didn't seem very concerned with the prospective consequences of driving on the wrong side of the interstate. (More..) --> Tonight, in downtown Shreveport, I've stumbled upon yet another movie shoot. This one
stars Liv Tyler and Kevin Bacon. I haven't seen them (perhaps because the crew is still setting up).
Posted by Ryan M. Powell at 12/17/2009 06:54:00 PM No comments:

On the road again

Since today marks the first of three projected days of halfway decent weather in central Ohio, it's time to hit the road again. (And by "halfway decent weather," I mean the low temps are supposed to be around 30 degrees, rather than 10-20 degrees.) This "decent" weather will buy me a little time to work my way south, where it should be a little warmer.

Once I get far enough south, I intend to follow I-10 to California, partly because I want to be around for the Rose Bowl, but also because I intend to walk from Santa Monica to Coney Island (NYC), beginning sometime in February.

I won't have a computer this time, and I don't know how much I'll blog from my phone while I'm on the road. If I do end up blogging regularly, I'm guessing I'll end up saying a lot of things that piss people off. Not because I want to piss people off, but instead because this kind of life messes with your head and creates a new reality that's impossible to understand unless you are the person living it. (Or maybe I really am a total prick.)

If I end up saying things that piss you off, I encourage you to leave comments that will piss me off, which will probably lead me to say even more things that will piss you off. (If you haven't already figured it out, that's just the way it works around here.) I realize there are only a handful of people who really care what I have to say here, and I'm sure that's not going to change.

Is that the best you can do?

Tonight, about half an hour after I buried my best little buddy, some guy left me a voice mail message:

The call came from this number: 239-269-9575. I assume the message was in response to the Naples cop video because: If he was referring to the cop video, the guy is an idiot. I don't know why so many people interpret that video as if I'm trying to make some kind of negative statement, because there is almost nothing negative about it.

Since I no longer have any reason to be here in Ohio, I figure I'll hit the road again within the next week. Maybe I should go to Florida. Or maybe I should call that guy back and tell him I'm on my way to Florida. Just to be a dick.